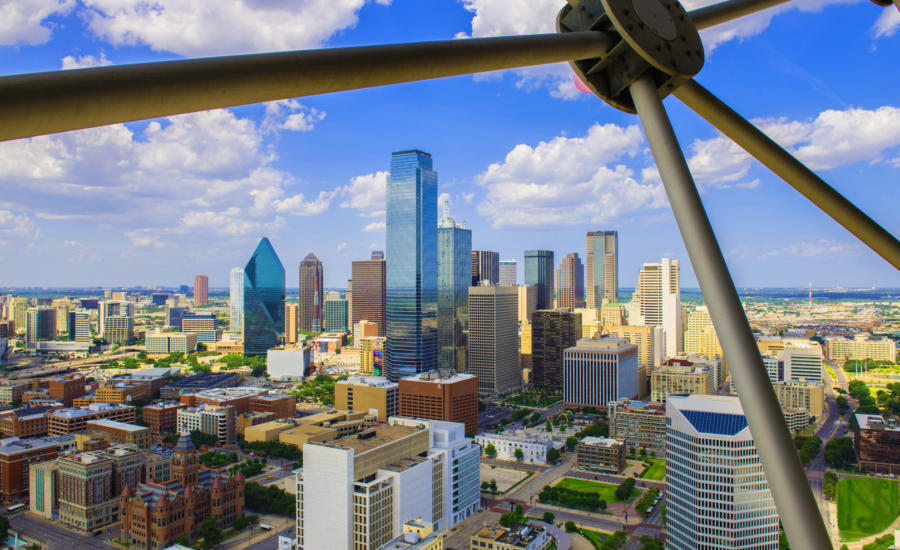 One of the fastest-growing metropolitan areas, Dallas is one of Texas's most exciting places to visit. This city has something for everyone, from cool urban spaces to art museums to cute neighborhoods to underrated outdoor activities. Of course, life is a bit different right now and probably will continue to be like this for a while, but this doesn't mean that we can't check out Dallas, even while abiding by the rules of safe physical distancing.

Let's explore some of the best things that Pegasus City has to offer:

One might mainly associate the Dealey Plaza National Historic Landmark District in Dallas with that fateful day of November 22, 1963, but this city park packs a lot more history. Sometimes called the "Birthplace of Dallas," Dealey Plaza is home to the first house built in Dallas, which also became the first courthouse and post office, the first store, and the first fraternal lodge. Declared a National Historic Landmark in 1993, the cityscape with its surrounding landmarks like the Texas School Book Depository, the Grassy Knoll, and Elm Street is one of Dallas's only historic district and one of the only five such districts in the state of Texas. Located just a few blocks from downtown and easily walkable, the district is an excellent addition to your Dallas city tour.

When one thinks of Dallas, greenery might not be the first thing that comes to mind. Nonetheless, Dallas is home to a beautiful botanical garden: 66 acres on the south-east shore of White Rock Lake, just 15 minutes from Downtown Dallas. Here you will find 19 featured gardens, including the 6.5-acre Margaret Elisabeth Jonsson Color Garden and its vibrant seasonal beds of more than 2,000 azalea varieties (one of the largest in the United States), as well as tulips and daffodils, and the McCasland Sunken Garden, where the Chico y Chica de la Playa sculpture and accompanying fountain provide the perfect setting for a little quiet time.

If you are flying to AIHce EXP and powerful aircraft are your thing, then this Smithsonian Affiliate museum, located at the southeast corner of Dallas Love Field Airport, is a must stop! The Frontiers of Flight Museum has 13 galleries and exhibits to wander around, including artifacts from the Hindenburg, lots of detail about aviators like Charles Lindbergh and Amelia Earhart, and a full-size model of the Wright Brothers' 1903 Wright Flyer.

Dallas has museums with world-class art, rich history, and unique exhibits, and many of them are free of charge. For example, the Dallas Museum of Art is among the 10 largest art museums in the country, with permanent collections ranging from African folk art to modern masters.

Located in the Dallas Arts District, the Crow Collection of Asian Art Museum features permanent and rotating arts from China, Japan, India, and Southeast Asia. The Goss-Michael Foundation, one of the best-kept secrets of Dallas' arts scene, features some of the UK's most prominent contemporary artists. The African American Museum provides a refreshing balance of African American history through folk art and alternating exhibitions featuring current African American artists. Dallas Contemporary is one of the largest art museums in America, and like many contemporary art museums, this edgy place offers rotating sets of thought-provoking exhibits.

When visiting a new place, be it a country or a city, exploring its food scene is necessary, and Dallas has a remarkable culinary landscape. Once upon a time, Dallas was known as the city of steakhouses, but nowadays, it is all about the tacos. Taco trucks are everywhere, and they make a great break for a conference attendee. But the fantastic tacos are not the only thing Dallas has to offer. The city has America's biggest concentrations of Laotian, Nepali, Korean, Pakistani, and Japanese restaurants. If you crave food from Central America, Dallas can satisfy that craving. There's a lot of good Indian food, and there are more than a few chefs who have brought over their experiences from Iraq and Syria. The pizza game is pretty good — maybe not like in Chicago or New York City, but there are places that offer all the famous styles. It should be noted that exploring some of these places requires some driving (i.e., if you are in the mood for Vietnamese, you will need to head out to Garland or Arlington; Korean restaurants can be found in two specific neighborhoods, and good soul-foud is south of Interstate 30). The only food that is everywhere? Tacos!

Dallasites (or is it Dallasonians?) take great pride in their city's outdoors: in total, there are 22,000 acres of parks and 125 miles of hiking and biking trails, proving that Dallas is an outdoor-friendly city. Klyde Warren Park and White Rock Lake are the two most popular green spaces in Dallas. Trinity River is being developed into a 10,000-acre nature district that will be 12 times as large as Manhattan's Central Park. So, whether it's open patios for a quick coffee or taco tasting, numerous bars where you can grab a drink, or bountiful parks for that morning or afternoon walk, Dallas outdoor scenery has something for everyone.

If you are attending AIHce EXP 2021 virtually, you can still visit Dallas virtually. For example, most of the museums in Dallas are offering virtual tours: Dallas Contemporary has launched a digital hub called #dcfromhome; the Perot Museum of Nature and Science brings fun ways to explore nature and science at home; The Dallas Zoo is using its social media channels to #BringTheZooToYou with virtual tours, chats with staff, and more. Cry Havoc Theater has announced "Project Ghostlight," a monthly virtual open mic series, where members can share two-minute writings in response to a three-word theme.